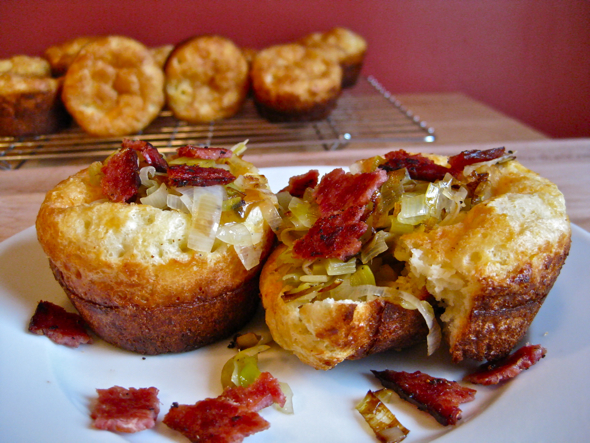 As a child, there were few things as thrilling to me as when we were awarded the rare treat of being served breakfast-at-dinner. Is it even possible to think up a variety of dinner choices more likely to send a child into a whirlwind of heart pounding joy? Pancakes for dinner? Waffles for dinner? Are you kidding me? FRENCH TOAST for dinner? Just stop now, before I faint with pleasure. 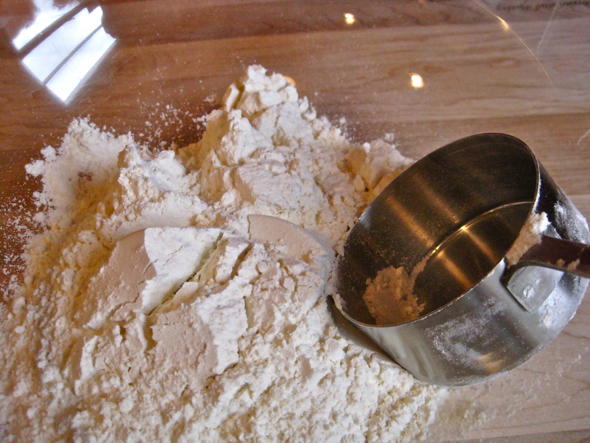 Alas, as an adult, though I would truly love nothing more than a crisp waffle for dinner, I find that indulging in basic breakfast fare for dinner no longer suits my constitution. Oh, sure, I still want to eat a waffle for dinner, but, in the interest of my well being, I have to choose to look the other way. Fortunately, what resides at the other end of that directional gaze is a big plate of popovers. 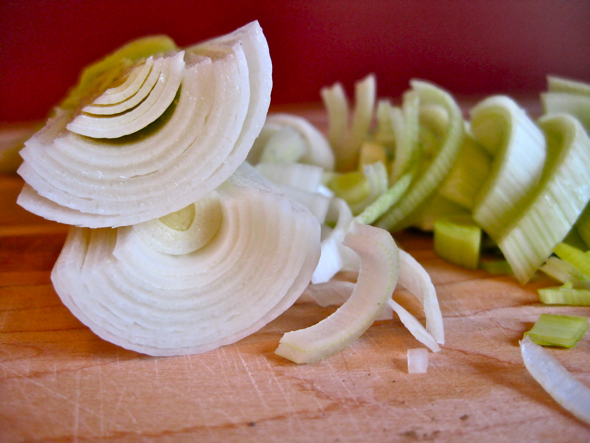 The beauty of popovers, hollow and mildly flavored as they are, is that they are literally made to be adorned with whatever you desire. Spoon them full of marmalade, spread them thick with Nutella, or, for the more grown up palette, stuff them with this herby, aromatic filling of leeks that have been gently braised in white wine. The buttery, crisp popovers, so soft on the inside, make the perfect pocket for the delicious filling, and served with a light salad they make an absolutely fantastic dinner that barely hints at their breakfast origins. Paired with something so savory and satisfying, suddenly your popover breakfast-at-dinner starts to seem a bit less unusual, though certainly no less special. 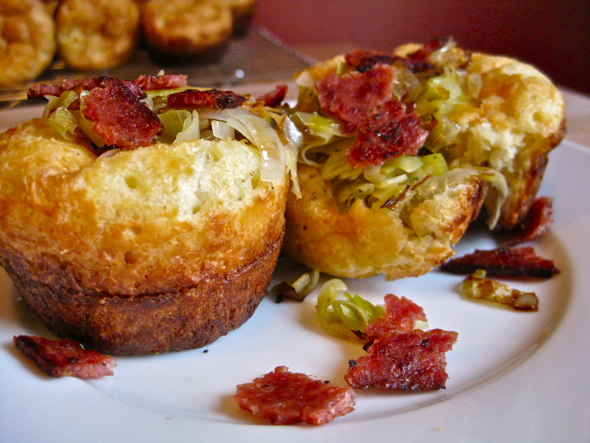 I don’t own special popover tins, and I really don’t think they are necessary to achieve superbly puffy popovers. I use a muffin tin to bake these, and my experience has shown that, time and time again, they work just fine. Though you may think it an error, you really do start these popovers in a cold oven. Some people swear by pouring popovers into an already heated pan, but I find this method to be easier, yielding more consistent results.

Thoroughly butter the insides of a 12-cup muffin tin, then set aside.

Whisk together the flour and salt, then add the butter, milk, and beaten eggs, and whisk together until just combined. The batter will be relatively thin.

Pour or spoon the batter into the muffin tins, filling each cup about 2/3 to ¾ full.

Preheat your oven to 400 degrees Fahrenheit. Place the popovers in the oven and bake for 15 minutes, while the oven heats up.

After 15 minutes, reduce the oven heat to 350 degrees Fahrenheit, and bake for an additional 15 minutes. The popovers should be deeply golden and puffed up. If they look a bit pale at this point, continue to bake them an additional 5 minutes.

Immediately remove the popovers from their tins, and gently poke a little hole in the top of each one, allowing the steam trapped inside to escape. This will ensure that your popovers remain crisp as they cool.

Slice leeks in half lengthwise, then slice each half into thin half moons. In a large pan, heat the olive oil over medium heat. Add the sliced leeks and sauté, stirring frequently, for 7-10 minutes, until the leeks appear soft and lightly darkened at the edges. Carefully pour in the white wine, and stir to combine. Cook for 30 seconds, allowing the white wine to steam and sizzle with the leeks, then cover the pan, reduce the heat to low, and cook for an additional 10 minutes, stirring occasionally. Add salt and pepper to taste.