Hallo! I’m Heather the Indie Fixx intern and I’ll be putting together a post every so often for my project {Tree}Household.

As a writer, artist and product of nature, I find myself trying to hack away at the divide between the indoors and the outside. I would almost always rather be out-of-doors, or at least barefoot, and feel a bit like I’ve just toppled out of a tree and landed in this somewhat sterile biosphere we call civilization. One of the ways I’ve found to bridge these spaces is to use flotsam from the organic world inside, inviting the relationship between our lives and the seasons and ecosystems we live in to flourish. Each {Tree}Household piece will feature an element of the outdoors with creative and useful ways to integrate it into our living walls, plates and hearts. 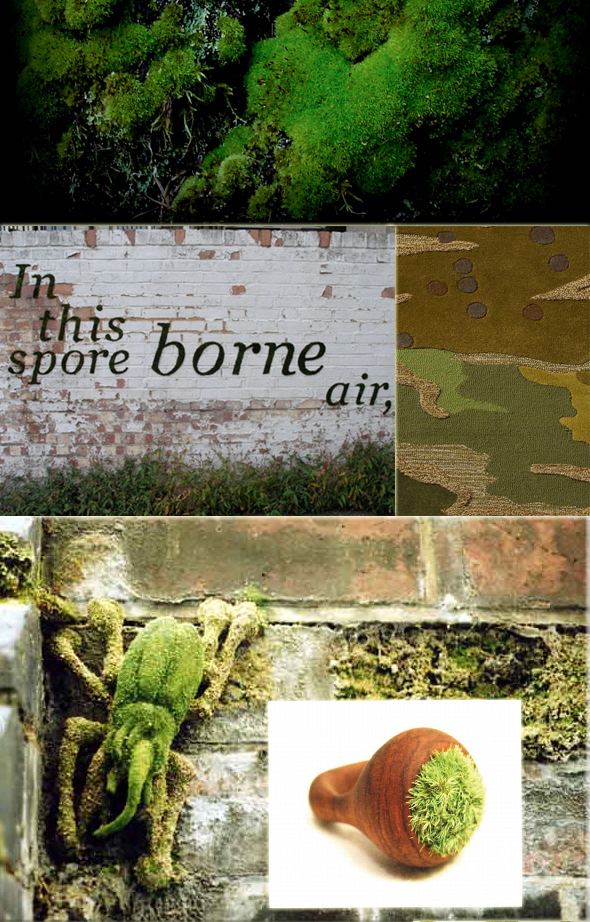 Today’s focus is that fuzzy rug that paves a royal green carpet for the noblest of bugs. Moss is unassuming and subtle, preferring shade and recluse to the spotlight, but its jewel tones and weird little habitats are unexpected. It sneaks up in between the cracks where little else will grow and fills in the quiet moments when nobody is watching. Moss is perseverant and yet easily torn, subtle ground cover but shockingly bright against a leafy floor, a plant of extremes and yet a lovely medium for artistic endeavors. 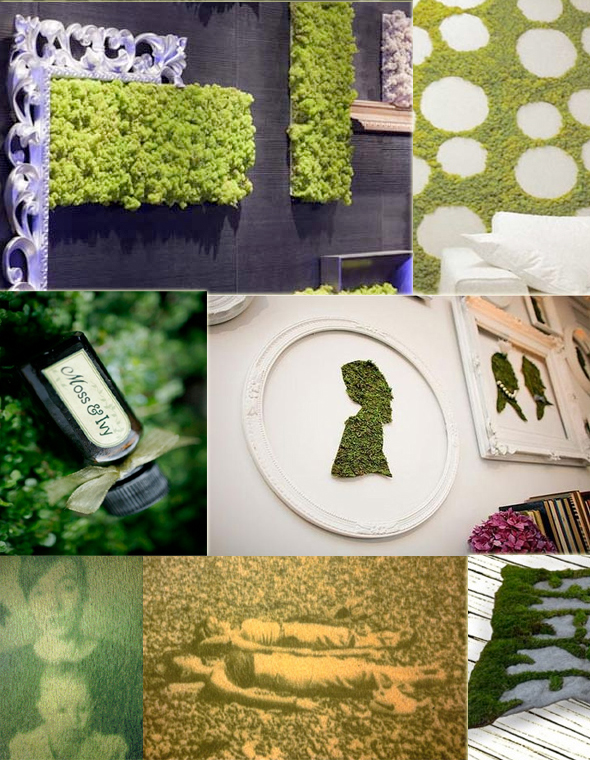 Its versatility lends itself to many uses. Sea moss is ground into a mineral smoothie drink in Trinidad, ground moss has become a popular green graffiti tool in London and it weaves into Styrofoam molds to form an alternative bath mat in Japan. The slow creep of this greenery represents nature’s determination to beautify the most concrete sidewalks. Reindeer eat moss because it helps keep their blood from freezing, and we humans need a moss because it is a natural reminder to be aware of our toxic outputs since it will not grow in heavily polluted environments.

Very unlike a rolling stone, I have found myself gathering much moss. Addressed with a sharp knife, moss cuts quite easily. Recently, I took an X-acto knife to a large piece of moss I found near the banks of a stream, and cut it into the puzzle piece shape below. For precision cutting moss into designs, the thinner and denser, the better.

Moss Puzzle Piece by the author

For more artistic moss endeavors, DIY moss “paint” is simple to make in a blender and allows you to grow moss on any fairly shady and moist hard surface. One recipe for the concoction involves beer, and the other uses buttermilk. Once the few ingredients are combined, just use a brush to swab the mixture onto a wall, tree, bench, rock, etc… and when the moss-to-be starts to grow it will evolve from your design into a shape of its own! This method is the magic behind the moss graffiti of street artists like Helen Nodding, Edina Tokodi, and Oki Sato (all featured in the images throughout) who use moss as an eco-friendly alternative to chemical based paints.

Find recipes for Moss “Paint” below:

{Tree}Household’s next post, Rearranging the Ferniture,  will be unfurling the mysteries of ferns and how to familiarize ourselves with those frond friends! Look for it next month.